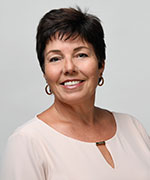 Hired as a Development Associate by Bermuda Hospitals Charitable Trust (BHCT) in March 2016 and promoted to Development Director in September that same year, Lisa Sheppard found a background in journalism a useful foundation in her roll with a non-profit organization. Lisa was named Executive Director in June 2018. She became Chief Executive Officer when the BHCT transitioned into the Bermuda Hospitals Charitable Foundation.

Now, a graduate in Non-Profit Management and a recent participant in Development Training at John’s Hopkins Institute, Lisa looks forward to evolving along with the Bermuda Hospitals Charitable Foundation as it moves into the next phase of fundraising and support of the Bermuda Hospitals Board and Health Care in Bermuda.

“Supporting health and health care improvements in our community is vital! Without our health, nothing else matters.”

Lisa also holds an Honours Bachelor’s (HBA) in English with a minor is Psychology and is a Certified Bereavement counsellor (CT).

“Giving back to my community and helping others are the hallmarks of my own happiness.”