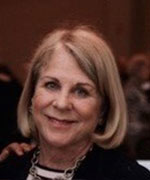 Jane came to Bermuda with her husband Richard[Rick] in 1976 when he took up a position at Appleby [then Appleby, Spurling & Kempe].  She raised three children and was active in charity work.  Jane and Rick met at The College of William & Mary in Virginia. and lived in Virginia while Rick was studying and received an BA& MBA.  Jane received a BA in Education. They moved to the UK where Rick attended Trinity College, Oxford and obtained a law degree.